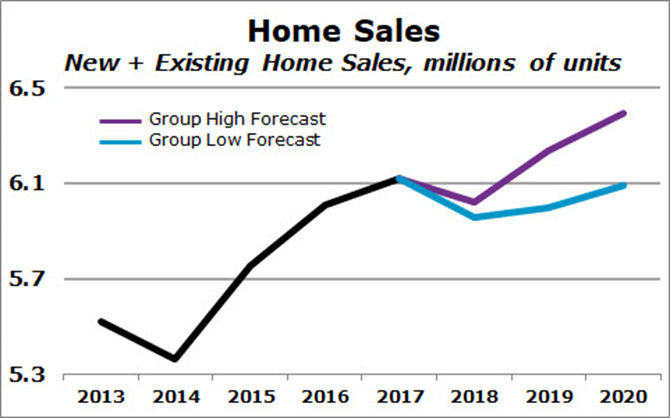 Slowing home sales in recent months have caused the four major real estate organizations tracked in this report to rein in their projections for home sales this year. Total homes sales for 2018 are, on average, expected to decline 2.0% from last year. That’s a reversal from just six months ago, when total home sales were expected to rise 2.8% this year.

Home prices have fully recovered from the Great Recession, with more growth expected

· In the first quarter of 2016, the U.S. House Price Index surpassed its pre-recession peak levels. The HPI measures the level of prices of homes sold that used agency financing across the country. 3

· Home prices rose over the past year in all but one of the nation’s 100 largest metro areas. Ten MSAs saw home price appreciation at or above 10%, with Boise City and Las Vegas leading with gains of 19.9% and 18.2%, respectively. Home prices in Honolulu dropped 5.1% in the past year. 3

· Each of the four organizations expects economic growth to moderate but continue at least through 2020. The quarterly projections through the end of 2019 are very similar, with growth rates nearing the current expansion’s average annual rate of 2.3%. 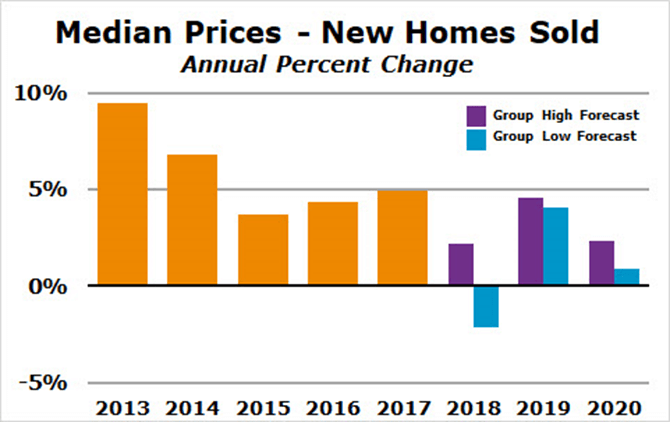 The Home Sales chart shows the number of home sales by year from 2013 through 2017, plus the highest and lowest forecasts projected in the past month for 2018 and 2019 from four major real estate organizations: Fannie Mae, Freddie Mac, the Mortgage Bankers Association, and the National Association of Realtors®. Each forecast is publicly available without charge from the organization’s website.

The Median Prices – New Homes Sold chart shows the median price for 2013-17 plus the highest and lowest forecasts projected in the past month for 2018 and 2019 from Fannie Mae, the Mortgage Bankers Association, and the National Association of Realtors.

The Economic Growth chart shows the highest and lowest projected changes in GDP for 2018, 2019, and 2020 from the four organizations. Growth is measured on a Q4-over-Q4 basis.

None of these forecasts necessarily represents a projection from Wells Fargo. Economic commentary and projections from the Wells Fargo Economics Group are presented here.

Let us help you